I will start writing from a sidetrack, but an important one. Making and reading comics requires ability to understand meanings of pictures as well as written text. The picture may also be loaded with significance the person drawing the picture was unaware of. When using a symbol with a fixed meaning, the situation is different and there is no room for interpretation. Considering for example the contemporary use of the swastika there is no need to discuss its meaning: we all know what it’s meant to represent.

In the recent years, Finnish patriotism has been kidnapped to serve a cause I do not recognize as my own. On Independence day, December 6th an organisation that calls itself national socialist marched through the streets of our capital. The organisation is about to be banned, and rightly so. It’s idea is to encourage a sort of Nordic culture fusion against all multiculturalism. This idea doesn’t evoke my patriotic feelings. My view of Finnish culture goes beyond the hundred and one years of independence: something that’s core remains unchanged through cultural encounters. This kind of “Finnishness” has been open and dear also to my relatives and friends with varying backgrounds. If there was a parade advancing for example the languages and cultures of the Finno-Ugric heritage, I’d be happy to join.

On Independence day I marched in the parade opposing the nazis. I don’t like demonstrations as experiences, but I recognize their impact, so I want to be involved. When I came to the spot, I heard about the swastika flags that had lead the parade we were opposing. Fortunately the police took off the nazi flags quite soon after they were raised. It seems strange that they are not completely banned in public to begin with. The Interior Minister Kai Mykkänen only stated that one needs to be careful about where to use these flags. What could possibly be a suitable situation for swastikas? This is a despicable symbol for hate and injustice.

In my own family, the nazi ideology was a part of everyday life only a few decades back. My grandfather believed in this ideology and lived by it. I have never considered his crimes as my own: I’m a different person and live in another time. But his actions were destructive also inside his own family. When hate and anger fuel the everyday life, it has a negative impact that reaches beyond several generations. Therefore I can’t understand why someone would think they could advance any kind of good, even for themselves, with these symbols. The Communications Manager of the police in Helsinki wished for a more clear advisory for the use of hate symbols. I would like to see them banned. The ban should also cover the symbol of the Nordic Resistance Movement “PVL” that organized the parade. However, an ideology does not improve from changing its symbol. The distress and fear of the people resorting in this kind of ideology should be dealt with some other means than allowing discriminating and destructive symbols in public spaces.

We need to be able to distinguish the significances that people are wearing – the ones that can’t be chosen and the ones that are particularly chosen. Also a distinction needs to be made between the actual meaning of things and wrong connotations attached to them: a full beard or a hijab does not automatically signify an islamist; a mini skirt does not signify a prostitute.

These significances have concrete consequences for the people that are being interpreted. That is why I also wanted to start making comics about political subjects. To be truthful, I would prefer doing only fictional comics with artistic value as the main aim, where the responsibility of possible political dimensions would be on the reader. When participating in projects of societal comics there is usually not enough time to invest in the artistic aspect in a satisfying manner; one has to struggle to find a way to formulate opinions into pictures and also worry about whether the facts actually hold, and if I’ve actually understood them correctly. A discussion is needed in order to change things: without discussions there would be no demonstrations, no voting activity or willingness to have an impact in one’s living environment.

The Goethe-Institute for German culture arranged an international project called Picture Politics in 2016 and 2017. Comics artists from different countries speak out against the rise of racism in Europe. In Finland we also held workshops with high school level students. It was both challenging and rewarding to ponder over the subject, which lead to many good insights. 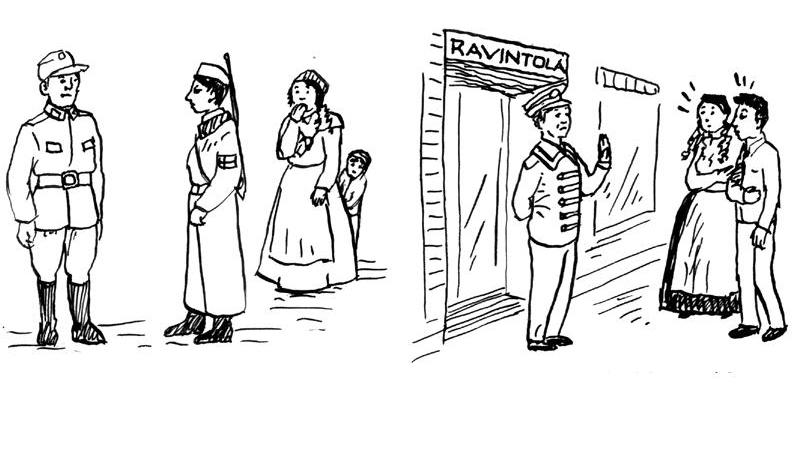 A dialogue in comics. First a part of my illustration. Below an example of eightgraders’ insight in a Picture Politics workshop: “One bad apple spoils the bunch.”.

For this project I also got to vent out my disappointment towards the Finnisch Foreign Policies. Societies were arranged to work under political systems, and it feels like those systems are still not working as they should be after thousands of years of development and training. Times are difficult, and probably will be for quite a while in a world of seven billion people and a changing climate. We are in need of very skillful politics, international cooperation that could genuinely prevent suffering: when people’s nutritional and other needs are secured, they are more likely to make better decisions for themselves, for other people and the environment. Our well nourished and wealthy foreign minister could set an example by defending, let’s say, women’s rights and self-determination instead of hindering them. 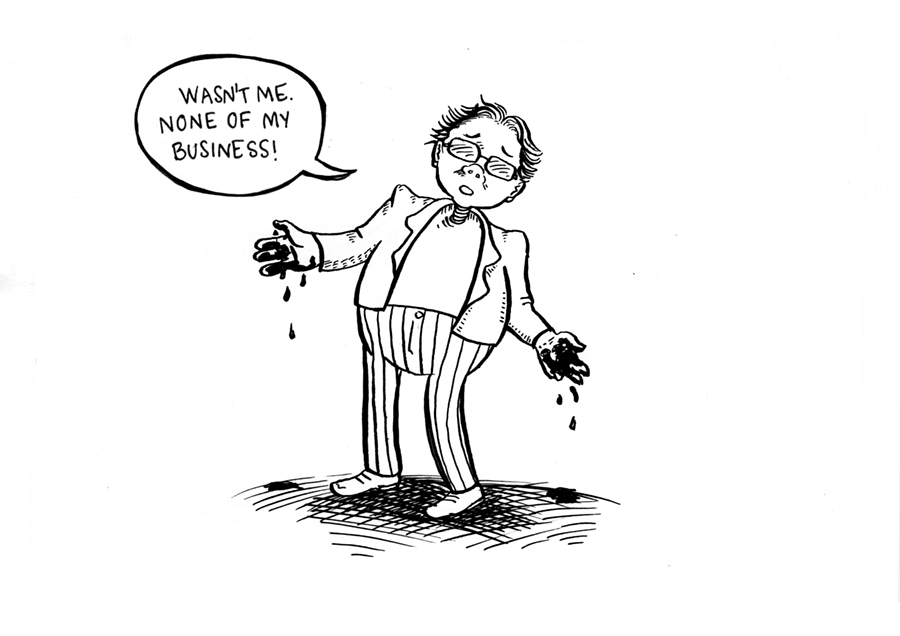 (Read the entire comic from here)