Tensions of emotion in Zenobia

In the Danish comic Zenobia (2016) by author Morten Dürr and artist Lars Horneman we read about Amina, a young child who flees from the war, gets on a boat with other refugees to cross the Mediterranean, and drowns in the end. This is not a nice or fun story – actually, it is hard not to cry when you read it the first time, even though it takes perhaps ten minutes to finish it. Since Zenobia was published, it has gotten a lot of attention – from Danish media, schools and readers, but also internationally, and it is as of this moment being published in more than 15 countries. Interestingly, the comic has been honored (and debated) as both a comic for adults and as a children’s book, and in both cases the focus has often been on the seriousness of the subject matter – the drowning refugee child. Zenobia seems to spark difficult emotions in readers across generations, and this is what I will look at here. 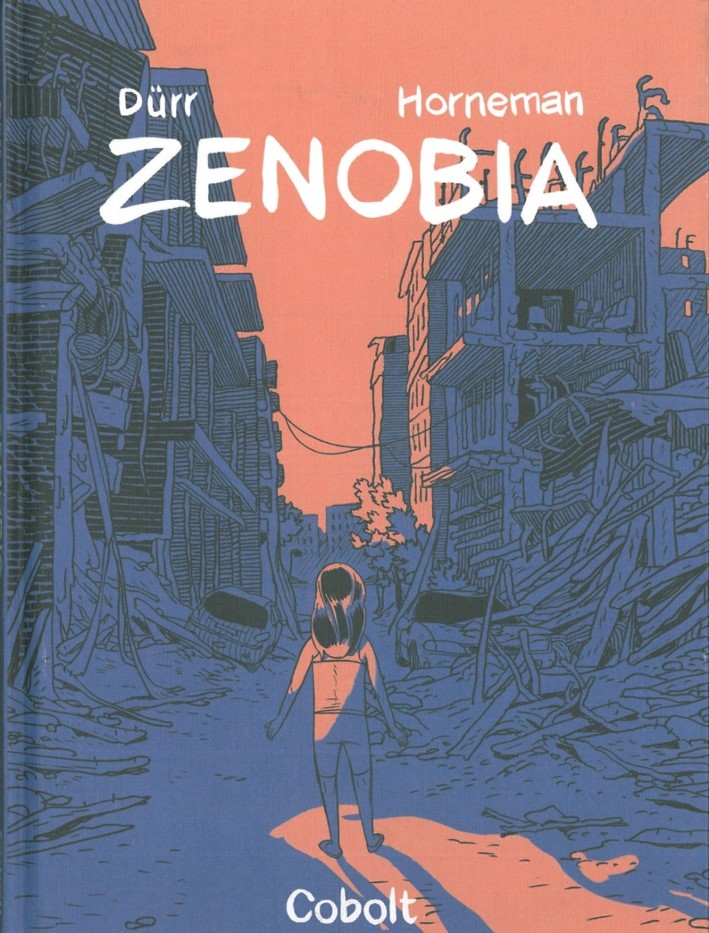 In The Cultural Politics of Emotions (2004), Sara Ahmed talks about emotions as something to be understood as a relational thing. She shows how it makes sense to think about emotions as something that is created in the tension between humans, things, experiences, places and so on. This makes a lot of sense when reading comics, and it is precisely in the tensions (in the sense of comics scholar Charles Hatfield) of comics that the emotions come to life.

The basic formal tension in comics is between the types of codes – between the “showing” and the “telling”. In Zenobia the division between these is most of the time clearly marked with the classic, white textboxes. Words in boxes, pictures all around them, in most pages. This highly segregated relationship between word and image creates a specific form of tension, and one example of this is when a flashback shows us Amina playing hide-and-seek with her mother on one page – but when the page is turned, we are, in the image, back in the water with the drowning kid. The text, however, is hauntingly, still in the hide-and-seek game of the comfortable past: “I’m right here, mom” the texts says; “In the water” it goes on in the next one. The tension between playing hide-and-seek and drowning is what haunts. 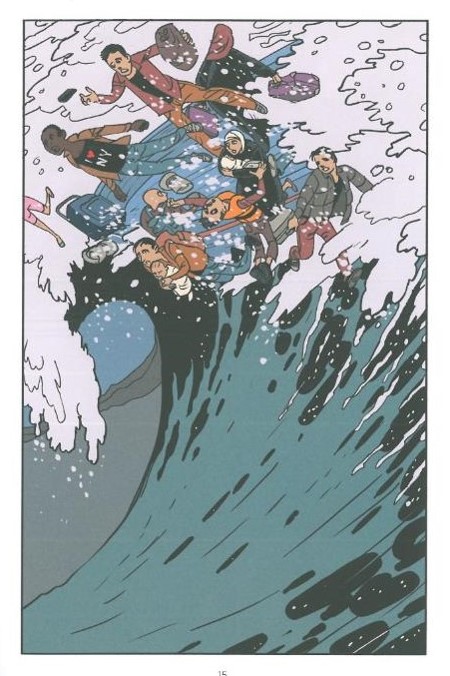 Zenobia negotiates the feeling of the children’s book through the repeated use of single panel pages, and this in turn underlines the particular slow pacing of the story. It is as if time is almost standing still. See, for instance, this page where the boat with the refugees is overturned by the waves. The dramatical highlight of the story, but it is not shown through the intensity and the racket of the sea and of the many people being thrown about. Instead this is almost a tableau, insisting on its intertextuality (another Hokusai wave in the comics canon), and the human beings on the boat are reduced, by the sea, to things thrown about. A fitting counter-metaphor to the often used, dehumanizing rhetorical downgrading of the refugee crisis – talking about “the wave” instead of talking about human beings. To the ocean, the humans are nothing special, nothing specific. And here we see the drowning refugee as a type. In sharp contrast to Amina who is a character in a story and thus is a specific refugee (or at least a fictional representation of one).

Everything on the pages of a comic plays a double role as both a moment in an imagined sequence of some kind of action and as a graphical element in a non-temporal design. Look at this spread from Zenobia. On the one page, we see the historical figure Zenobia, the great Syrian warrior queen who almost became the ruler of the entire Roman Empire. The other page shows us Amina in the water, but the composition of the two pages links the two figures together. So even though the first page is the last page of a flashback about Amina’s mother telling her about Queen Zenobia, it is also, at the same time, coupling with the next page and telling another story – through the means of composition, the surface of the comics page. In this case, a rather simple story: Amina is Zenobia – and as Zenobia is a symbol of all Syrian women, perhaps of Syria as such, so is Amina. Amina is Syria. 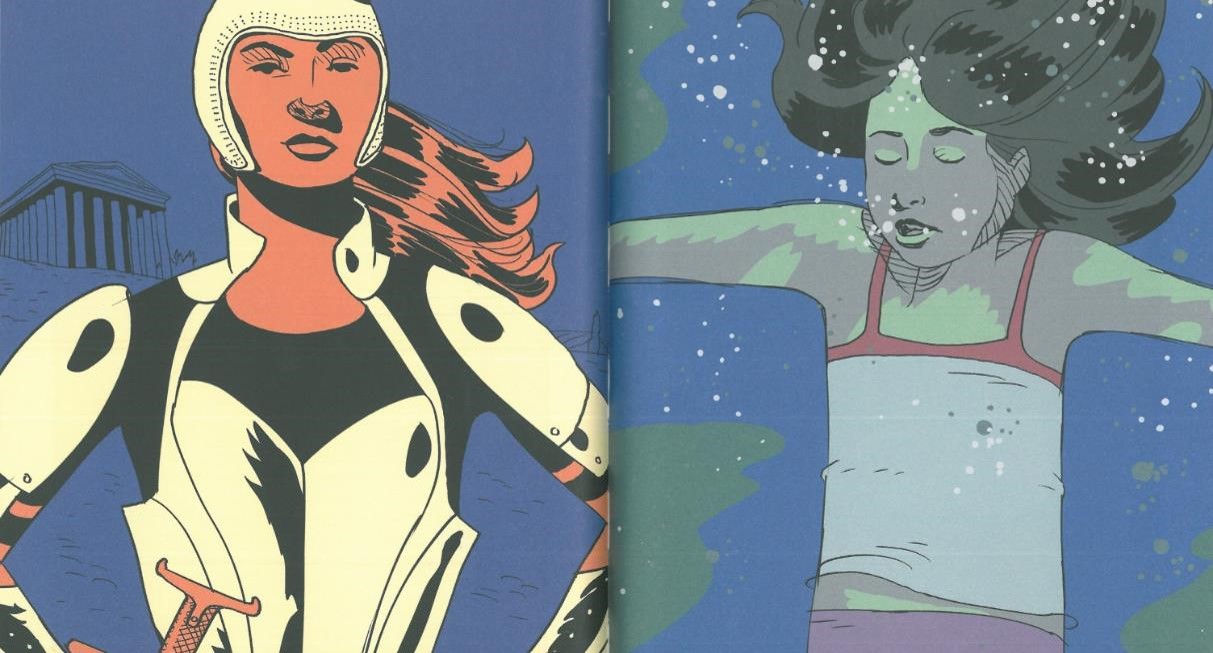 Far away and very close

These formal tensions of comics are important players in the creation of emotions in the reader, but just as important are the tensions in the content and in the context. Namely, the tension between Amina as an individual and as an example of all refugees. Secondly, the tension between the (safe) situation of the Scandinavian reader and the (unsafe) situation of the refugee. For the regular reader in Scandinavia, the Syrian refugee does not necessarily have a face, and Zenobia is undoubtedly an attempt to put a human face on this figure. The means is the fictional story with a main character, yes, but Zenobia works exactly because it does not stop there, at the individualizing of the Syrian refugee. It broadens out Amina, and she is always also an example of all refugees – all the other individuals. Perhaps this is why the story is so affective even though the story is technically “fictive”.