Picturing the realities of migration

Because migration is a phenomenon of the real world and an experience of real people many of the comics dealing with migration are non-fictive or documentary. Documentary comics tell about real lives and show things that have actually happened. While the primary goal of a fictive comic may be to entertain or to introduce an alternative reality, the primary goal of a documentary comic is to share knowledge about our world.

A documentary comic can, for example, explore what migration is and what kind of conditions and agreements determine migration. The Finnish-language anthology called Mitä sä täällä teet? Tarinoita maahantulosta (2016) (What are you doing here? – stories about immigration) brings together stories in comics form about people who have moved to Finland for various reasons and short text sections that explain different concepts for migrants, such as “immigrant” and “refugee”, or regulations governing the mobility of people, such as the Dublin Regulation or the Schengen Agreement. 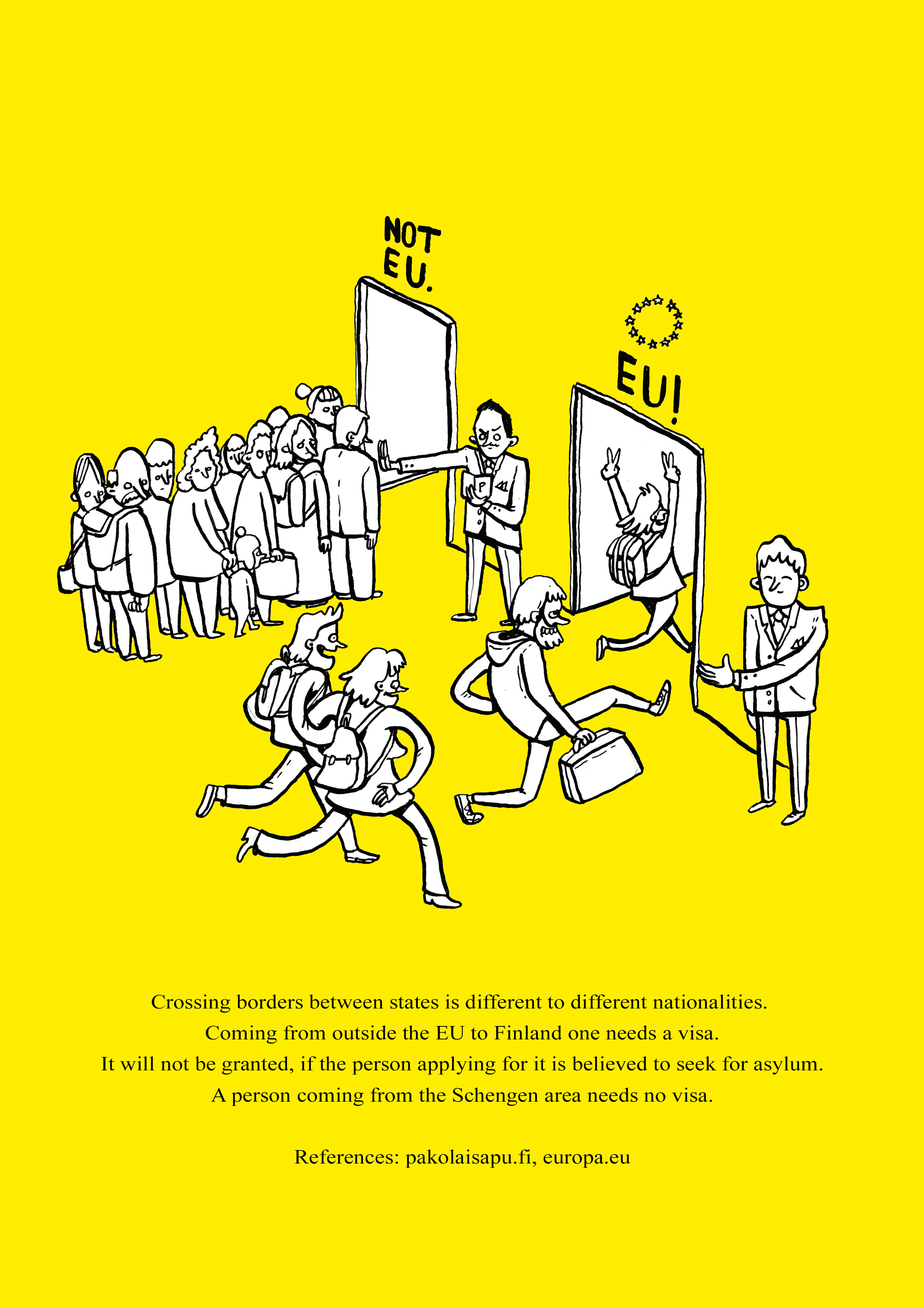 The main objective in these one-page presentations in which a short informative text is combined with an illustrative picture is knowledge diffusion. Every text credits properly the sources from which the information is collected. References include, for example, websites like pakolaisneuvonta.fi (website of the Finnish Refugee Advice Centre) and europa.eu (website of the European Union). By crediting the references the comics album communicates to the reader that the info texts are based on verified and generally accepted information. The info pages that follow each comic in the anthology set the factual frame for the stories told in comics form.

In addition, the comics narratives in the anthology have their source in the real world since they are collected from people who have moved (mostly) to Finland. The stories are based on interviews made by Hannele Richert, the editor of the anthology, and on conversations between the comics artists and their interviewees. Interviews are a typical documentary method that sets the factual basis for non-fictive comics. Other methods of information gathering are research and observation.

Each story in the anthology begins with an introduction of its protagonist. For example Reetta Laitinen’s story “Miguel” opens with the following information:

Miguel’s introduction starts with objective factual information but moves quickly to subjective experiences. A similar alternation between “cold facts” and subjective impressions continues throughout Miguel’s story. The reader is informed that, for example, Miguel has worked at a gas station, in a telephone booth factory and at a dock. On the other hand she learns that Finland welcomed the Chilean refugee family warmly. “Finns were friendly although they had not seen many foreigners before.”

Miguel’s story is an illustrating example of the guiding principle behind Mitä sä täällä teet? Tarinoita maahantulosta. The anthology is not only about presenting facts of migration to the reader but also about bringing the experiences of migration to her attention. How does it feel to leave one’s home country? How to adapt in a new environment? How does a foreigner see Finland? Through 15 short stories the anthology gives several answers to these questions. Not all experiences of settling down in a new country are as positive as Miguel’s.
Read Miguel's story here.

Henri Gylander’s “Sara and Zaran” tells about a Romani family who has fled from Kosovo to Sweden because of the ethnic persecution they have suffered in their home country. They hope to get an asylum in Sweden but that does not go as planned. After a promising start the family receives shocking news: their asylum application is denied and they are facing deportation. The following four years the undocumented family lives on the charity of Swedish NGOs and individuals. The panel from Sara and Zaran's story depicted below illustrates how the family members experienced the four-year period in their lives. 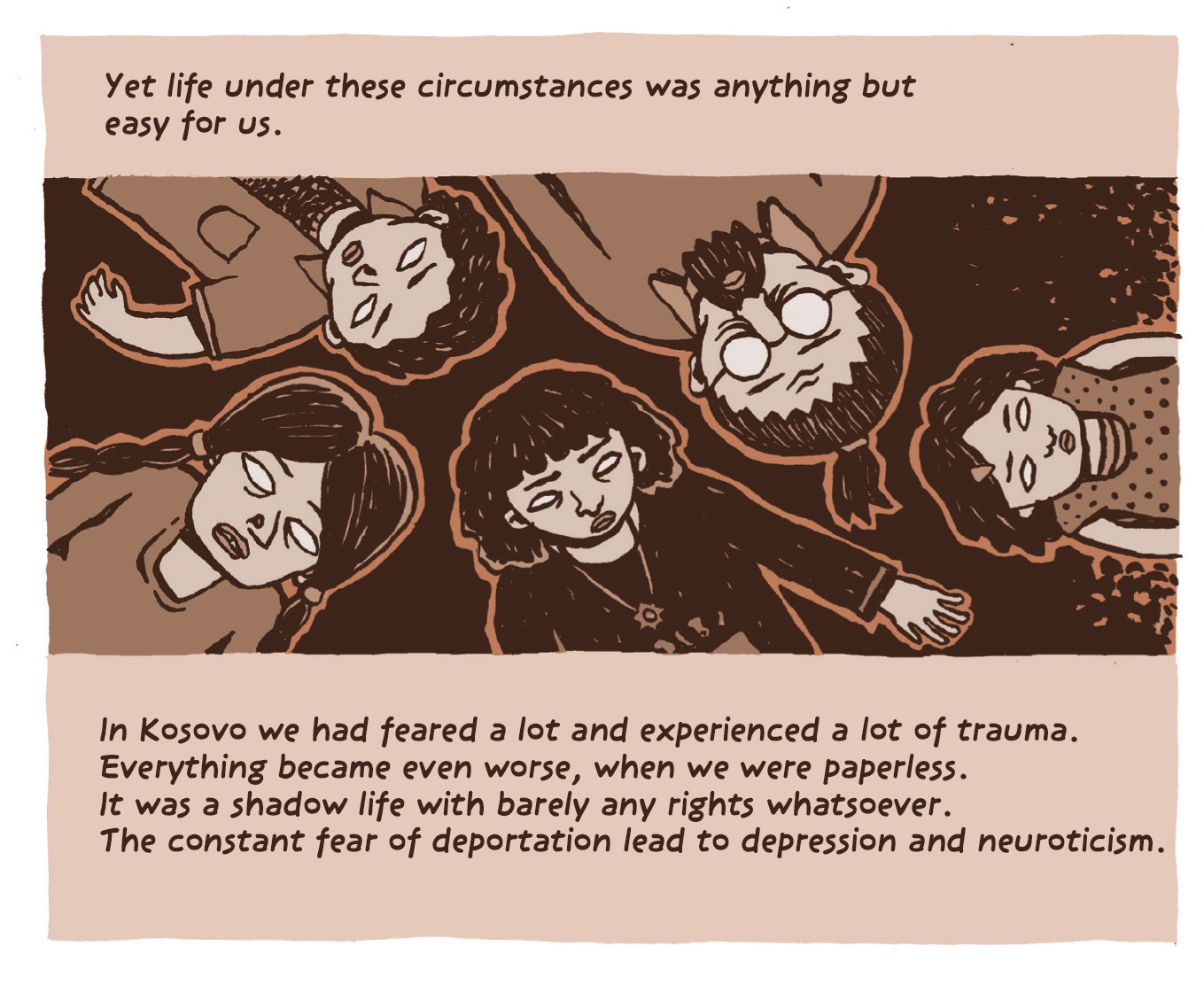 In the text boxes of the panel the family’s distress is being verbally specified: the trauma caused by persecution in Kosovo is mentioned, and so are the depression and anxieties caused by the fear of deportation. But what do these hardships feel like? The continuous fear and depression might be hard to imagine, if one has not personally experienced anything similar. The visuality of the panel gives some sort of feel to the experiences of the family. The picture set between the text boxes shows the family members floating in the air against a dark background. Their bodies seem weak-willed and the dreadful impression is emphasized by the empty, staring white eyes. Each family member is floating in a different direction and they are separated from each other by the dark background and the red outlines around their bodies. The visual expression brings forth the effects of fear and depression on both the individual and the social level. The depiction of the characters visualizes the stagnation they experience, and their positioning in the panel communicates their difficulties to speak with other family members in the difficult situation.

While the info pages discussed earlier convey general and theoretical information on migration, the story of Sara and Zaran’s family shares subjective and experiential knowledge on the subject.Taken as a whole, the anthology brings theoretical and experiential knowledge together to complement each other and by doing so gives a multilayered picture of migration.I
Read Sara & Zaran's story  here.