How to read colours in comics 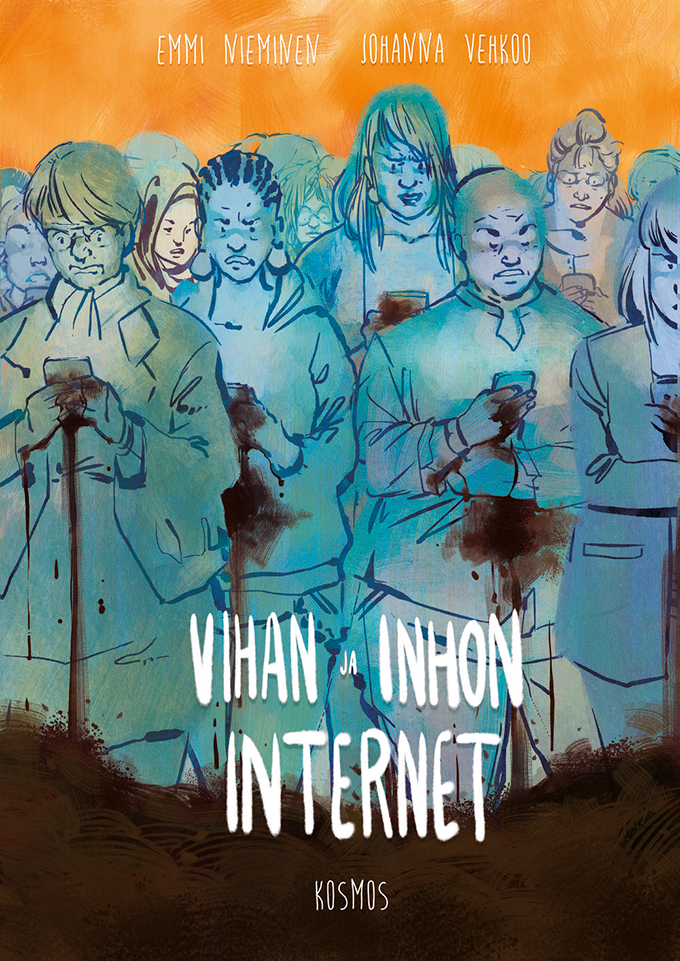 Those familiar with the qualification requirements in Finnish elementary education and high school have stumbled upon many a different “literacy” – a recent addition to which is “multiliteracy”. The term refers to an understanding of different modalities and the ability to combine different systems of meaning. Comics are a most convenient medium for the education of different literacies.

Kulttuurisia kohtaamisia (‘Cultural encounters’, only published in Finnish) is a book that was published in 2010 contains articles from researchers Raisa Simola and Jouko Jokisalo also comics by seven artists. The book was published with antiracist intent and is still a good read after ten years.

Say it in comics! 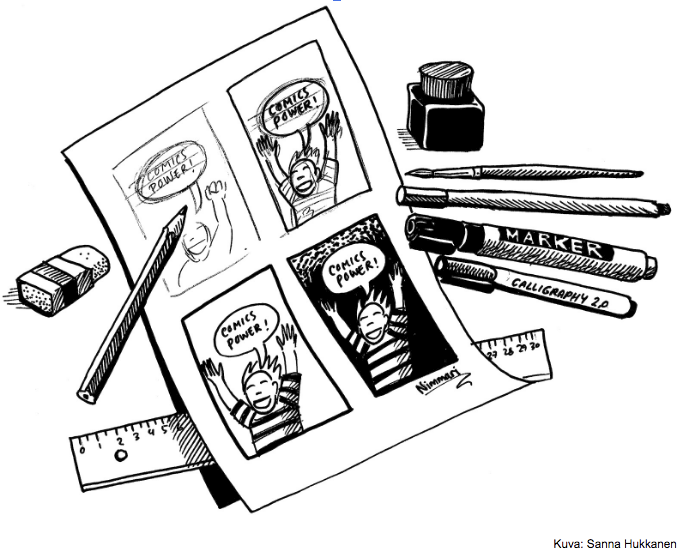 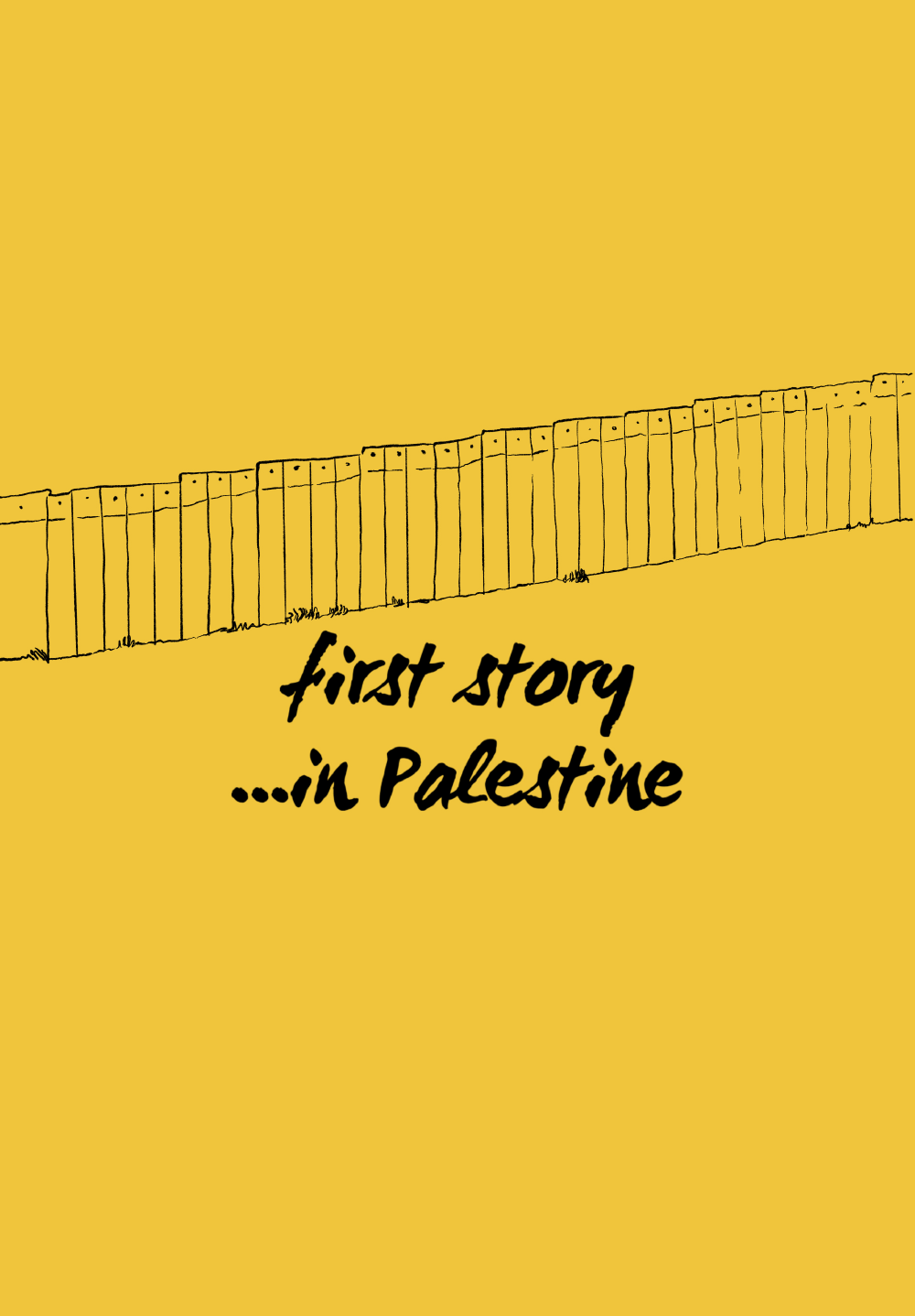 Counter stories by Vagelis Kolotsios This is an attempt to depict and connect stories of different women, coming from different backgrounds but facing similar challenges and sharing similar dreams and hopes for their future. On the one hand, in Greece, refugee women live in hotspots surrounded by unknown culture and language. In Palestine, on the otherhand, they are the daughters and grand-daughters of refugees.If they...

Oh no, did I just say that?  Internalized attitudes shine through our speech as unpleasant implications. Warda Ahmed collected a series of comic panels out of the brainfarts that racialized people have to hear once too often.  The style is inspired by Chucha Marguez, with juicy colors, significant thinking material and a bonus: a bingo panel for racial discussion.

What do we do this summer?

The third project meeting of 2019 was held in the beginning of June in Helsinki. Our plans include some program for the Helsinki Comics Festival this coming September, a migration-themed text book about comics analysis for high school teachers and university students, and an international conference in June 2020. But before these are at hand, our members are active in other occasions during the summer. Johanna Rojola’s work...

Tensions of emotion in Zenobia

Writer: Felix Kühn Ravn In the Danish comic Zenobia (2016) by author Morten Dürr and artist Lars Horneman we read about Amina, a young child who flees from the war, gets on a boat with other refugees to cross the Mediterranean, and drowns in the end. This is not a nice or fun story – actually, it is hard not to cry when you read it the first time, even though it takes perhaps ten minutes to finish it. Since Zenobia was published,...

Cover over hate – stickers and posters to print out

Active members of the Feminist Comics movement noticed hateful stickers and posters in different cities. The stickers are hard to remove and sometimes even razorblades are found under them. It seems safer, easier ja and more effective to cover them with new stickers and posters, ones that spread positive, antiracist messages. We joined forces to collect the stickers and spread them to as many as possible, so here you are!

Writer: Anna Vuorinne There is one particular panel in Paula Bulling’s comic Im Land der Frühaufsteher (2012) that keeps haunting me. A full-page image in the middle of the story shows one of the main characters of the comic, Farid, waiting for a train at a railway station. The only thing we can see of Farid, however, is the contours of his body against the waiting hall of the station. Why has he suddenly become invisible? Bulling’s...

Writers: Warda Ahmed, JAKKE, Hannele Richert, Johanna Rojola The poster of the current (20.–24.3.) comics festival Tampere Kuplii 2019 caused a discussion about the hidden racism of cartoon and caricature tradition. The poster got mothballed and the picture was changed – is the case closed already? On the contrary, the discussion is just beginning! Tampere Kuplii is an important event in the Finnish comics calendar,...

Writer: Aura Nikkilä In February 2019 the Finnish broadcasting company Yle aired Juho-Pekka Tanskanen’s film Waiting for Barcelona (2018), a documentary that shows a darker side of the sunny Barcelona through the portrayal of the everyday life of Mou, a Gambian young man who collects junk metal on the streets of the city. Tanskanen’s black and white film follows Mou around the city, roaming the streets with his shopping...

Comics and changing reality: Mukku from Mämmilä found unfitting for the poster of the Tampere Kuplii comics festival - which is just as well

Writers: Ralf Kauranen and Olli Löytty The Tampere Kuplii comics festival will get a new poster. Due to strong criticism expressed on the Facebook event page, the original poster containing characters from Tarmo Koivisto’s classic comic Mämmilä was abandoned by the organizers soon after its unveiling. The poster’s design followed the model from the early Mämmilä comics albums. Although the poster is now removed from the...

Written by Hannele Richert I will start writing from a sidetrack, but an important one. Making and reading comics requires ability to understand meanings of pictures as well as written text. The picture may also be loaded with significance the person drawing the picture was unaware of. When using a symbol with a fixed meaning, the situation is different and there is no room for interpretation. Considering for example the...

Written by: Ralf Kauranen. The 2018 Pulitzer prize for editorial cartooning was exceptionally given to the creators of a serialized comics story. Journalist and author Jake Halpern and artist and illustrator Michael Sloan received the prize for their narrative about two Syrian families who escape the civil  war to the US.

Written by Olli Löytty When we speak about belonging to a particular place, the root is a strong metaphor. In the same way as roots attach a plant to the soil, humans are thought to grow a fixed connection to their place of residence. The metaphor has its flip side. The rootless does not belong. Sanna Hukkanen’s autobiographical comic book Juuri (The Root, 2015) tells about integration. The root functions both...

Picturing the realities of migration

Written by Anna Vuorinne. Because migration is a phenomenon of the real world and an experience of real people many of the comics dealing with migration are non-fictive or documentary. Documentary comics tell about real lives and show things that have actually happened. While the primary goal of a fictive comic may be to entertain or to introduce an alternative reality, the primary goal of a documentary comic is to share...

Gianluca Costantini: To Escape a Hotspot

Written by Silja-Maaria Aronpuro. If the ripples of the European refugee crisis have reached even Finland in recent years, the actual waves hit the Southern borders of the EU: Italy and especially the island of Sicily, where migrants reach the shores of Europe after crossing the Mediterranean Sea. In his comic “To Escape from a Hotspot” the Italian graphic journalist and human rights activist Gianluca Costantini deals...

The project adds up to something more than the sum of the individual contributions of the members. Surely we would do research, write articles and draw comics even without the project. But cooperation puts our performance to a higher, otherwise unattainable level. We learn from each other, get new ideas and see things from different viewpoints.

Being first comes with responsibilities!

Written by Ralf Kauranen and Olli Löytty Recently (11.8.2018) the largest Finnish newspaper Helsingin Sanomat carried a piece on and interview with comics scholar Kai Mikkonen. The background for this was partly that the renowned academic publisher Routledge published Mikkonen’s book on comics narration, The Narratology of Comic Art, last year. In his book, Mikkonen brings together perspectives from comics research...