There is one particular panel in Paula Bulling’s comic Im Land der Frühaufsteher (2012) that keeps haunting me. A full-page image in the middle of the story shows one of the main characters of the comic, Farid, waiting for a train at a railway station. The only thing we can see of Farid, however, is the contours of his body against the waiting hall of the station. Why has he suddenly become invisible? 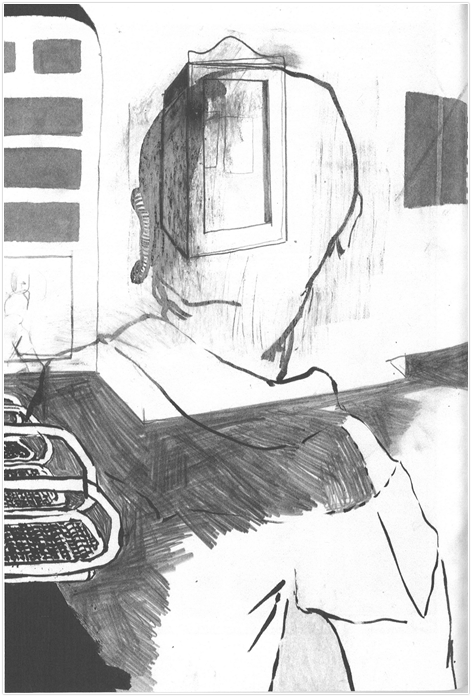 Against this backdrop Farid’s invisibility could be interpreted as a metaphor for his nonbelonging in the society, a metaphor quite commonly used in discourses of migration (an illustrating example of this is to be found in Ville Tietäväinen’s Finnish comic Näkymättömät kädet discussed recently in this blog by Aura Nikkilä). But the more I think about the circumstances in which Farid and his peers are living and the experiences they are going through, the more I wonder if there are also other possible interpretations of Farid’s invisibility. Does it visualize his mental state? Is it a portrait of a traumatized person?

In recent years, scholars in both psychological and cultural studies of trauma have pointed out that trauma is not only caused by singular, particularly shocking or violent experiences. Everyday oppression and psychological violence based on race, gender, and sexuality do have traumatizing effects as well.

Literary scholar Stef Craps (2013, 26) notes that mundane racism can have seriously harmful effects on one’s well-being: “Racism nowadays typically takes the form of daily micro-aggressions […] One such incident alone may not be traumatizing, but traumatization can result insidiously from cumulative micro-aggressions”. Micro-aggressions or subtle everyday racism takes many forms. It manifests, for example, in the stereotypical conceptions of everyday discourse, in the categorizing media imagery, and in the innocent questions about the origin of a racialized person.

In visual storytelling, the experience of a trauma is often communicated through the trope of invisibility, think for example of the invisible child in the short story in Tove Jansson’s Tales from Moominvalley, who is traumatized by her upbringing, or the protagonist of Ulli Lust’s autobiographical comic Today is the Last Day of the Rest of Your Life, who is portrayed as invisible after she has been raped. In Farid’s case the reason for his possible traumatization is the discrimination and racism he is experiencing on a daily basis.

Im Land der Frühaufsteher depicts perceptively the mundane and subtle forms of discrimination. It shows the degrading aspects of the asylum homes, where people live for years waiting for their asylum decision. It discusses the problems of Residenzpflicht, a law that restricts the movement of asylum seekers in Germany. It draws attention to criminal cases that have remained unresolved possibly due to the fact that the victim has been a “foreigner”. It depicts racist incidents that happen in broad daylight in public space. All of these are part of everyday racism that might be difficult to detect if it doesn’t affect oneself.

When speaking about trauma and traumatization, it is important to remember the dangers of victimization. It is vital to acknowledge the pain of another but if we see someone only as a victim we risk diminishing the agency we ascribe to her. A victim is weak. A victim is in need of help from others.

In my view, the portrayal of the non-white asylum seeker characters in Im Land der Frühaufsteher manages to show their vulnerability in a way that avoids victimization. After the page with the invisible Farid, the story continues with the most explicitly racist incident in the whole comic. A middle-aged man, who is also waiting for the train, begins to interrogate Farid in English about his origin and his purpose of being in Germany. Farid answers him in German but the man refuses to understand him. Later, when the man learns that Farid and Paula were earlier discussing in French, he exclaims about Farid's language skills: “The French of Africa! It is more simple than European French. With only little words.”

During the incident Paula tries her best to defend Farid. The most powerful resistance, however, is practiced by Farid himself. After trying to take the situation calmly and to speak sense to the man, Farid simply gives up. He doesn’t need to be reasonable since his opponent is not reasonable either. Farid takes upon the man’s claim about Africans being simple and carnivalizes it by acting like a monkey. Although possibly traumatized, Farid refuses to be the victim of the story. He is an invisible man whose existence is violated by racist practices but at the same time he is an active and empowered individual who can stand up against the oppression. 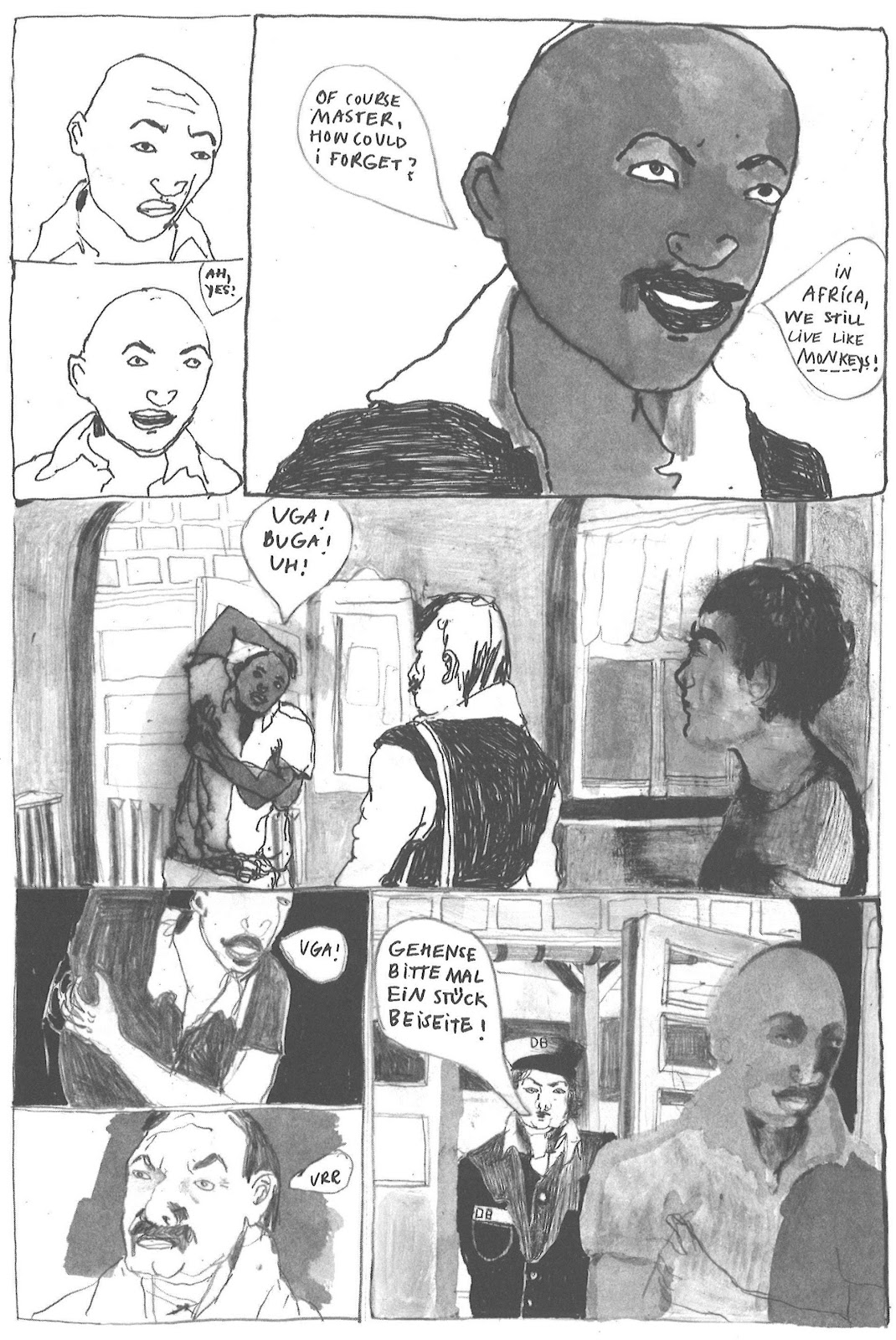 Bulling’s comic does not give a final answer to the question whether Farid is traumatized or not. And in the end, this is not the focal question. For me the invisible Farid is a reminder of the fact that, besides its cultural and societal dimensions (that have recently been discussed also in this blog), racism does also have its individual and psychological aspects. Racism is for many people a hurtful and even a traumatizing personal experience. And for this reason the feelings and the mental health of individuals needs to be taken into account in debates about racism and in antiracist practices.

If you want to hear more about this topic, especially in the context of Finland, listen to the excellent panel recorded at the Antiracist Forum 2018: https://www.facebook.com/ARFFinland/videos/178675446390454/